A swarm of scooters whooshes by the cars, the trucks, and of course, the cows. The traffic is simply maddening. I am in Bangalore, in the South of India. The only traffic rule that people seem to respect here is blowing the horn. So, the noise is a permanent feature of the landscape. I am on board a moto-taxi, or a tuk-tuk, as they call them here, feeling both terrified and bewitched by the experience. Will I make it alive to my destination?

Indians have a special relationship with their scooters. I have never seen anything quite like that before! Whole families ride them: dad at the wheel, mom sitting in the back, with her legs to one side and her silk saree dancing in the wind, and one or two children in the middle of the human-sandwich. But that’s not all; Indians treat their scooters as loading vehicles. If there were a world competition to see how much you can pile up on a scooter, Indians would win, for sure. I’ve seen a family of three, carrying a live, full-grown sheep in their arms. I’ve seen hundreds of vendors piling mountains of products to sell as well. My favourite was a man, perfectly balancing a huge pile of egg crates, travelling at full speed on the motorway.

Even though the journey was impressive, making it to the orphanage Blessings Home, and seeing its founder, Prema Devanandam, for the second time, was even more fascinating. Prema is a little Indian lady, with a big redemption story. Prema grew up in a poor family, with six siblings. Her parents did not have enough money to feed all the mouths and pay for school fees. As Prema was not very academic, she grew up feeling rejected and completely unloved. 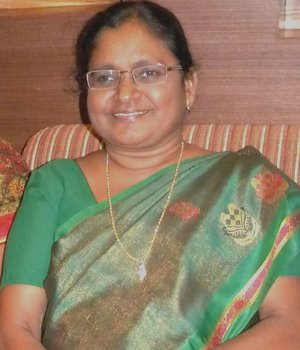 Struggling with poverty and depression, feeling isolated from her family, Prema tried to commit suicide seven times. The last time she drank poison: “But when I was in the depth of the pit, Jesus appeared to me and said He had a purpose and a plan for my life.” Still on her bed, convalescing, Prema decided to give her life to Jesus and to live to serve Him. “I felt loved for the very first time in my life. I felt a joy and peace that I had never experienced before”. Jesus had rescued her, and now she would spend the rest of her life rescuing others.

After her encounter with Jesus, Prema decided to study social work, and started working for an orphanage. In 2003, she took a step of faith and opened her own orphanage. Visiting the slums in Bangalore, Prema rescued 13 homeless children, that were malnourished and marginalised. As she did not have any help from the government, she used her own salary to feed and clothe the children. In time, people started to notice her commitment, and offered some financial support, so she could rent a room where the children could sleep more comfortably.

Prema decided not to get married so she could give the children her undivided attention. She has been a mother to them for over 15 years now. At the moment, there are 36 children at Blessings Home. Prema speaks of each of them with great joy. She tells me of their dreams, who is musically talented and who is getting new braces. Prema’s eyes glimmer with pride when she talks about Rachel, who recently finished university. They are a big family, and Prema is a mother hen.

When I ask her what the greatest obstacle to her ministry is, she says it is never knowing where the money is going to come from to pay all the bills and feed everyone. Her health is not as strong these days either, but she quickly adds, “When I do not know what to do, I get on my knees. This is how I can go on. Prayer has much power.” I look at her, as she speaks of her difficulties, wearing an evergreen smile. Suddenly, I became aware I am in the presence of a little giant. I know she is going to be honoured in the Kingdom of Heaven, because she is already a citizen. In fact, she is piercing the darkness and bringing the Kingdom to earth.

We become citizens of the Kingdom of Heaven here, on earth. The Kingdom of Heaven is not just a place or territory, but the realm where God reigns supreme. Wherever Jesus is King and His will is obeyed, that’s his Kingdom. When we allow God to align our priorities with what really matters to Him, He brings his Kingdom to our hearts. As Christians, we have the privilege of following Christ’s example and being with those who need hope. As ambassadors of the Kingdom, we carry the message of Hope, when we bring God’s presence where it is needed the most.

About a year and I half ago I started working for Adventist Radio London (ARL) as a presenter and producer. Prema was my first interviewee. I was going to India on a humanitarian trip, and I simply took my recorder with me. I will never forget the experience!  I believe sharing real life stories on the radio makes a huge difference. The world does not need more theory, the world needs to see how the love of Jesus has radically transformed our lives, to the point of no return — the point at which we can no longer live selfish lives but live to love and serve others. Your prayers and support allow us to continue sharing the Hope of Jesus! To get involved, visit http://adventistradio.london/get-involved/